The modular design of the P2O process is built on a structure of racked reactors, feeders and towers which allows for cost-effective process efficiencies.

Plastic2Oil's P2O processor has evolved significantly since inception. In its current configuration, the processor requires approximately 4,500 sq. ft. to operate which makes it ideal for local site installations. General operations involve monitoring the control room screens and cameras to track each processor's operating parameters, as well as loading plastic onto the in-feed system.

Although many sources of feedstock are available, we are focusing initially on post-commercial and industrial sources, since these are readily available in large supply, and present a cost-effective solution for companies.

The hopper can be loaded with up to 4,000 lbs. of plastic feedstock per machine per hour using a forklift. The plastic is loaded into the pre-melt reactor by a continuous conveyor between the hopper and the reactor. The plastic is then heated using the off-gases produced by the process.

After the plastic has been liquified in the pre-melt reactor it passes through a solids-liquids separator before going into the main reactor. 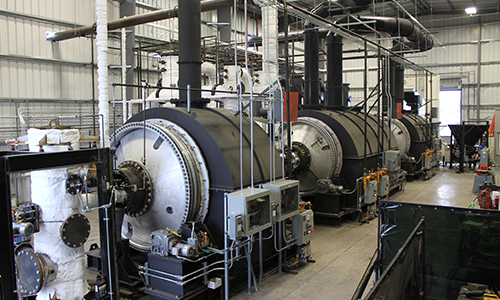 In the main reactor, the liquified plastic hydrocarbons are cracked into various shorter hydrocarbon chains and exit in a gaseous state.

Plastic2Oil's proprietary catalyst and unique process engineering enables us to capture an average of 86% of the hydrocarbon content of plastic.

The Petcoke residue produced at this stage (approx. 2-4%) remains in the processor chamber and is automatically removed while the processor is in operation. 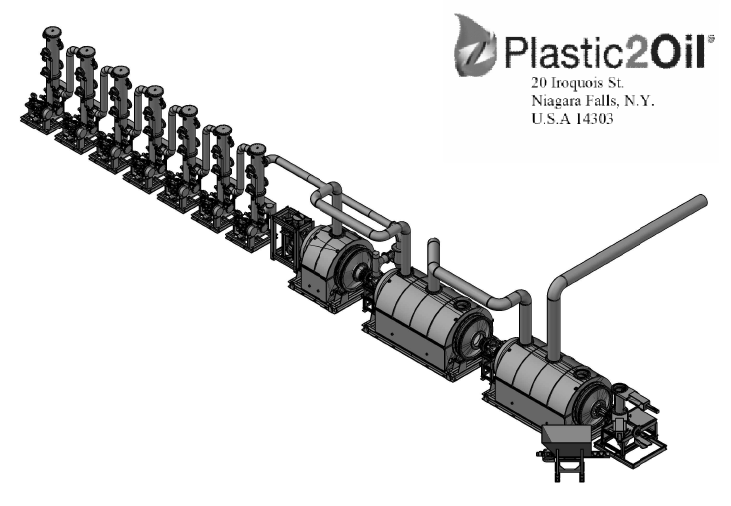 From the main reactor, the gases that are fuel oil and diesel are condensed and separated, then proceed into temporary fuel tanks. All of the gaseous "light fractions" or off-gases (approx. 10-12% of process output), such as methane, ethane, butane and propane, exit the system and are used to fuel the furnaces.

The fuel output is transferred to additional tanks for storage automatically by the system. Our automation system controls the conveyor feed rate, manages system temperatures and the off-gas compression systems, as well as periodically pumping out the newly created fuel to storage tanks. The P2O process is 'closed-loop'.

Significant technological advantages have been integrated to downstream operations to guarantee fuel quality, along with installing an inline fuel additive injection system on both heavy and light fuel condensing systems. We have also engineered a hot-tap residue removal process.

Fuel additives are injected inline while fuel is being produced to increase their effectiveness. The residue removal system works while the processor is running; the reactor does not have to be cooled down or stopped to remove residue.

The Company created a modular design and standardized the system to racked reactors, feeders and towers. This reduced the system footprint to a few unique modules, making fabrication and installation for deployment simpler.

Over the years, upgrades have included the installation of low NOx burners and the addition of a pre-melt system to increase through-put volumes. The Company has worked with third party fabricators to produce standardized reactors and towers.

A cyclone is used in the second machine to help remove particulate matter in the vapor stream.

Many of the P2O process variations are unique to Plastic2Oil and the Company has filed for international patent protection.

The Company will continue to seek patent protection on subsequent innovations as they are developed and require protecting.

Get in touch with us for more information on Partnership Opportunities.